Last week James headed over to visit Estelle, Samuel and I. After arriving he head straight out to the new Irish pub in Basel as Scotland were playing at 18:30. All the boys had gathered so we proceeded to watch a great performance by the Scots with a 2-1 away victory. Lots of bevy was consumed which included, Beer, Gin, Whisky, Cocktails (wish I could remember them), Dr Pepper, Champagne and Brandy. We arrived home at 3am of course only to wake Estelle, Sorry my Love.

On The Thursday I had to collect my car from the Garage in Mulhouse so James and I had a mini-adventure getting there and back. James loves public transport. Of course we wouldn't of need to take public transport with James wasn't too gay to drive on the right. One day he'll learn.

Friday was when we eventually headed to Milan, it was a quick journey thanks to Der Schlegel, we arrive at 8pm and of course headed straight out and since it was James' birthday I had made a booking at the Absolute Vodka Ice Bar. After stopping at a Scottish pub to try and get directions we decided to get a Taxi, which was a great decision as it was about 3km away. 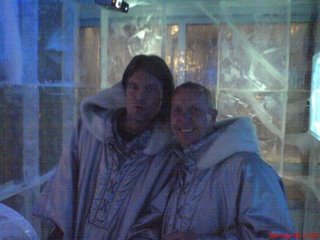 Once we arrived we handed our Cash over and got covered in some rather fetching ponchos. Everything in the bar was made from Ice, even the glasses. All they sold was Vodka therefore we had a couple at the premium price of 10€.

The following morning we got up and headed towards Monza after the Underground, Train, Bus and walking we eventually arrived 2 hours later. What a journey for only 10mins in the car as we discovered the next day. On arrival James rushed to get kitted out in Red Bull gear and Frank pondered whether to buy anything or not. It was 20mins before the first practice session on the day so we rushed off to find our seats at the parabolic corner, the last corner. To our delight the seats we had were great right at the top of the Grandstand with a great view of the track and huge TV screen.

When that first F1 car went by Frank almost broke a smile, it is a strange feeling when they go by whatever it is I like it. The session passed with all of us just transfixed to the screen and track. After that we went for a wonder around the track and took in some of the local entertainment. We grabbed some food and a nice bottle of Vino for the Qualifying. It was quite exciting and David Coulthard managed to finish his normal 15th, pretty poor. It wasn't going to be a good weekend for the Red Bull team. After the GP2 race and some spectacular crashes right in front of us he headed back to the hotel. We decided to go for a nice Italian meal, Frank eventually found somewhere that was acceptable for him and we all dinned Italian style except James who had Sausage and Chips.

The following morning we were up at 6am as Frank (we) decided to drive to the circuit. It was only 10min away and after a quick bus journey from the parking we were there. We watched another GP2 race and managed to get glimpse of Alonso and Max Mosley who arrive in a Helicopter in front of us.

The big event was the race which in my opinion would of been okay to watch at home but great to be there. DC was pants during the entire race but James and I swigged our beer and wine and enjoyed every minute of it. MS won in the end after getting some help from the Stewards.

At the end of the race we ventured onto the circuit and walked round to the pit straight, Frank was really happy about this. We even managed to get some free beer just for James having a kilt on, in this world if you don't ask you don't get.

Overall an excellent weekend enjoy by all, roll on the next F1 weekend!!

Click here for a link to more pictures of Monza Weekend.

Fab photos - sorry to have missed out