Malaga - With the Boys

Hi all,
Last weekend was the yearly Jolly Boys outing. Bob, James, Thomas, Piggy, Stewart, Franko, Kevin, Hammy and Liam (I think he was there) all headed down to the Costa Del Sol to take in some of the local culture. We managed to do not too bad actually, on the Thursday when we arrived eventually via Granada airport due to operational reasons. It was a long day with lots of beer drunk....
Some handled it better than others and some just didn't seem to be there. 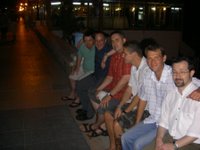 The Saturday was a Boys trip to Malaga to check out this beautiful city, Liam decided to stay and make some new friends by the pool. We had a great day and enjoyed some Tapas which was superb. In the evening we headed by to Torremolinos and ended up at a Karaoke bar, of course I had get up and get the crowd going. There was also a guest appearance of the "backing gropper". After 2am we thought it was time to "Stand Down" Thomas told Hammy and he wasn't too happy about this for some strange reason. 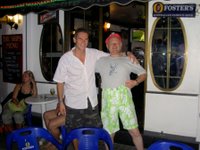 On the Saturday we all headed off to Aqualand Liam brought a couple of his new friends with him (nice of him to ask) but we all still had a good time anyway. Moment of the day was when Bob backed down from the boomerang, what a laugh that was as he walked the walk of shame!!! Well done Bob you're a Star!! "bug bugg bugg"
Saturday night was very low key, once again the boys went for a nice meal and Liam went with his new friends to the hotel. 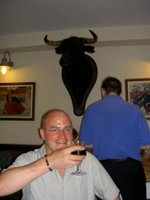 That night I tried to get a Bloody Mary with all the ingredients, this proved to be bloody impossible. All was quiet and we headed to bed at a reasonable time. The following day all the Basel boys headed back early after saying our goodbye's.
It was a great weekend and was nice to get everyone together for the weekend. Things had a rough start as normal but after that everything was very smooth. Hopefully next time Liam can join us as he just didn't seem to be there and I hardly said a word to him after he decided to part from the boys weekend.

Can't wait until next year's event, minus a couple of faces. Next stop for me next is Monza!!!!! VVVVVVVVVRRRRRRRROOOOOOOOMMMMMMMMMM.


Click here for a link to more pictures of the Jolly Boys Outing.