This month I have been mostly watching the "Coupe du Monde" it's been good, but some games have been disappointing. Hopefully England loose today and the French win against the mighty Brazilians.

So what have we been up to for the last 2 months, well basically raising a little boy, working, drinking and having BBQ's as the weather here for the last 6 weeks has never been below 25C (I like these times, reminds me of one of the reasons why I'm here).

Of course we had the visit of Thomas and Kath which was a great week, lots of bevy was consumed and we kept busy every day. We paid a special visit to the only concentration camp in France for Kath as she loves anything about the war, a bit like me really. Mylene was kind enough to let us sample every wine that was available in the cellar that she works in, that was a day and a half, some of us had one glass too many (I rather liked the pino noir when we had it with our meal Kath). 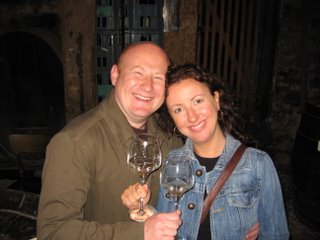 Since then Ann game over for a flying visit that was a lazy weekend, the furthest we got was a walk to Village Neuf for lunch in a lovely wee restaurant. Ann seemed to enjoy herself and hopefully the next time her feet will actually touch the ground.

I'm glad to say that DJ Sammy (As James calls him) was an absolute dream during the entire time and he still is. He is a very easy going baby just like his Dad; he has his Mum's looks though.

I went to some friend’s house for the England - Trinidad & Tobago game, Kevin and I were surrounded by about 20 Englishmen but we were supporting Scotland, Jason Scotland that is. Unfortunately he never made it off the bench for the entire tournament and England fluked a result.

A BBQ was had last weekend as Manfred was over so Frank and Claire joined us with their new arrival Jake. The barrel of beer was in the fridge and along with the Argentinean beef and Franks DIY BLT Burgers we had hunners to eat. We even had a couple of footy games to watch too.

I've been very busy at work these days work at least 10 hours per day, but it should hopefully all pay off in the end.

Estelle and I always need a project to keep ourselves busy; our next one has already begun. We are in negotiation with a builder about constructing our very own house. This is a very long process and we are not too far away from agreeing what we want. If we start building in the next month or so it could be ready for next June, just in time for next summer and if you're in for the beginning of summer you might as well throw in a pool. The plot is still in the sleepy village of Huningue just along from the Town hall where we got married and down form the Rainbow Bar (which has changed names) so our local will be just about 100m away. I'll keep you all informed.

This weekend again its 1 million degrees so it's beer, footy and F1, some of Estelle friends are visiting tomorrow.

Sorry I've not being keeping the blog too up to date but it's better than never!!

Hope to see you all next month!!

P.S We were surprised to bump into Snelling on our visit to the Eco-Museum. 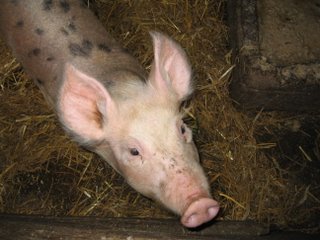